Welcome to Spoiled by Technology

Spoiled By Technology proudly represents many of the world’s leading manufacturers of professional audio and visual equipment.  Our territory includes Illinois, Wisconsin and Lake & Porter counties within Indiana.  Spoiled by Technology is a professional sales organization providing integrated solutions in a continuously evolving world.

ZZ Ward and the Audix OM6 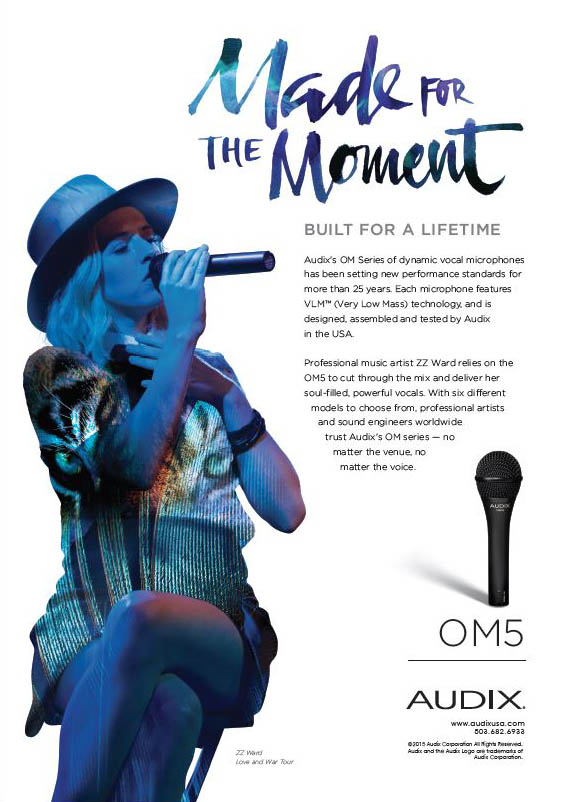 Volanti builds on over 25 years of display industry expertise and focuses on large display systems for niche commercial markets. Innovative products and cutting-edge technology combined with design and final assembly in the USA.

In addition to standard models Volanti Displays designs and final assembles, in California USA, brilliant LED & LCD video displays with options to suit specific market and application requirements. We have been involved with video and signage displays of all shapes and sizes from small to very large, eg up to 84".

Want to hear how amazing your drums can sound? Check out Audix endorser Cobus Potgieter jam on this *NSYNC cover with his brand new all-Audix setup! Cobus uses D6 on kick, D4 on floor tom, Micro-D's on rack toms, i5s on snare, SCX25A's on overheads, and CX-212Bs for room mics.

Squarespace is AWESOME - http://www.squarespace.com/cobus (just click that link for 10% off) A HUGE thank you to Squarespace for supporting independent music... Read more... 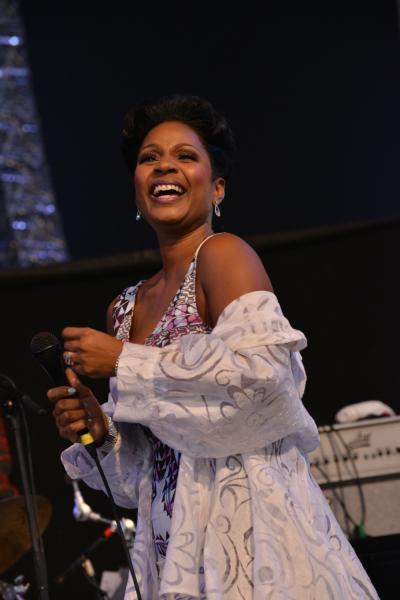 Stephanie Jordan is a powerhouse of dynamic musicality, a modern and unique voice shining through the long, storied history of jazz music. In performance as well as one-on-one she is humble but strong, gentle but full of power-a dichotomy that makes its way into her own performance, carefully crafted over many years of many audiences.
Stephanie grew up in the rich musical environment of New Orleans, in a family who played a variety of instruments-yet she describes herself as an "accidental singer," someone who wanted to sing, but didn't think she could. That changed one night on her birthday, at a club where her brother was playing. He asked her to sing a song with him, and her career was born.

Her philosophy on singing comes from many hours of listening to the radio, when radio was great-singers like Chaka Kahn, Gladys Knight, Aretha Franklin, Diana Ross, and many R&B groups in the 70s. "When I would listen to the radio," she says, "you had to really sing to be played. Nowadays, you can go record an album and they can doctor your voice up in the studio. Back in the day, that didn't happen-people had to sing." Though she loved R&B, she was surrounded by New Orleans jazz, and jazz is what got into her blood. 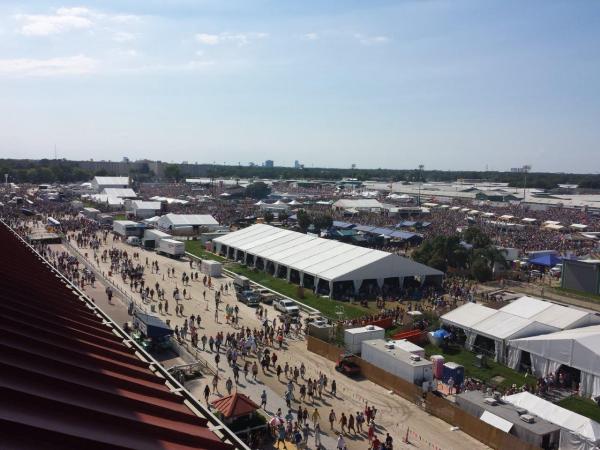 The raw energy of New Orleans' Jazz & Heritage Festival would be hard to exaggerate-it's a riot of musical color, a roaring week and a half of electricity that somehow celebrates the past, the present, and the future of jazz in one multilayered celebration. The festival itself dates back to 1970, headlined by gospel great Mahalia Jackson and jazz legend Duke Ellington-today, this unique event is home to a smorgasboard of musical genres including jazz, gospel, Cajun, zydeco, blues, R&B, rock, funk, African, Latin, Caribbean, folk, and much more.
This year, the heat turned up in New Orleans-80 degrees and rising-as the Jazz and Heritage Festival got itself ready for the 460,000 people who would swarm its fairgrounds over the next week and a half. As in the past decade, Audix was on the front lines of the festival with the engineers, crew, and musicians of Jazz Fest, supplying over 400 microphones for over 5,000 musicians and 500 acts in the festival's different stages.
Here are a few highlights from Jazz Fest 2015 as seen through the eyes of Audix Co-Founder Cliff Castle. "If you have not experienced the Jazz and Heritage Festival in New Orleans, you need to put it on your bucket list!" he says. "It is unique in every way and there is no other event that I know of that offers such a wide diveristy of music in a mutli-stage format with unrivalled sound quality. 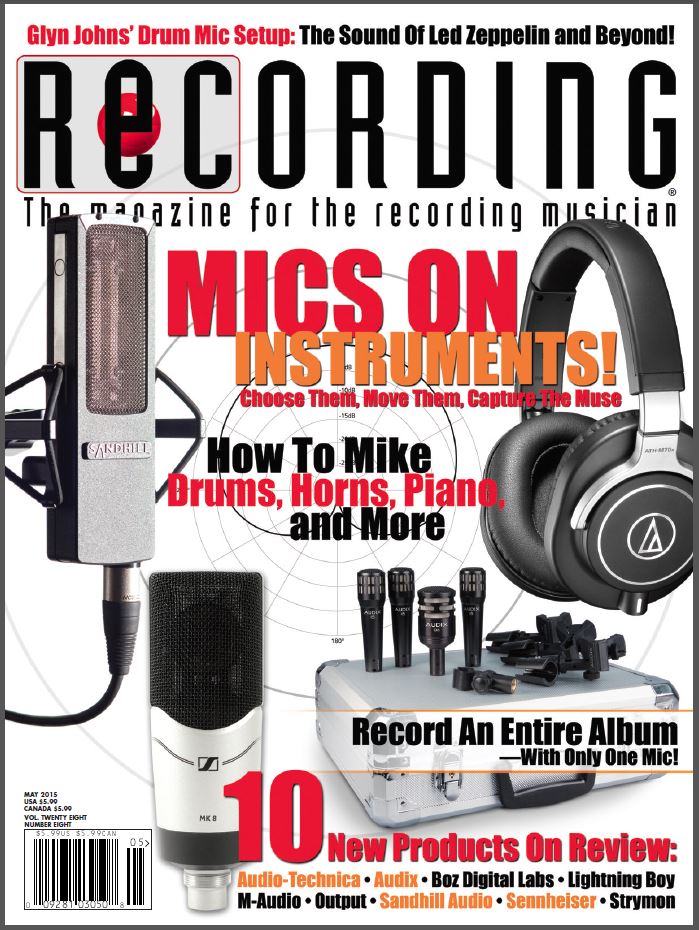 If you read our review of Audix’s new Limited Edition D6 drum microphone in our January 2015 issue, you will know that Audix is celebrating 30 years in the microphone business this year.  Over the past three decades the Wilsonville, OR-based company has brought to market quite a few microphones that are now considered modern studio staples the world over.

Audix also has a long history of putting together well-thought-out drum mic packages. This month, for our instrument
miking issue, we are taking a look at a handy little collection that happens to be made up entirely of the company’s two
most famous models: the i5 and the D6.

Since we gave our readers a fresh look at the D6 in the January issue, we will focus a bit more on the i5 and the package as a whole. While both mics have other signature uses, most notably on guitar and bass amps, I’m focusing this review on drum
applications, with some tips on how to maximize the utility of these handy mics. 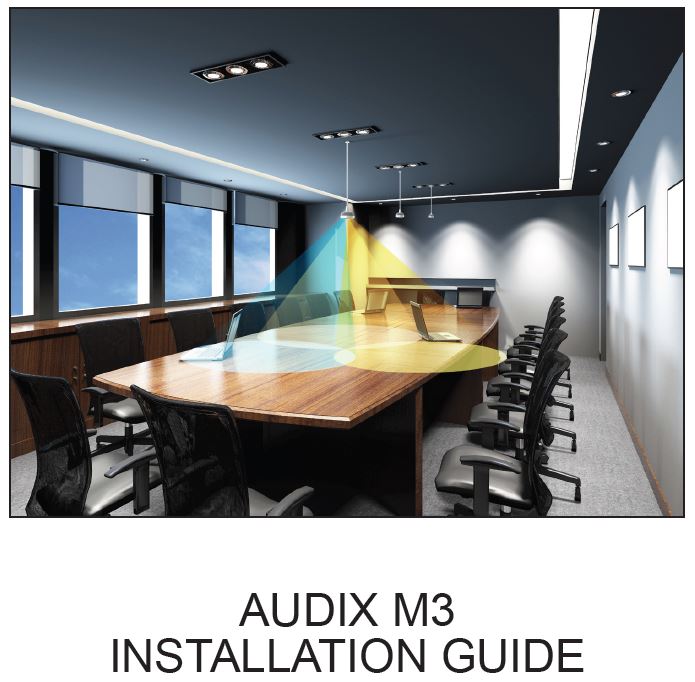 Performance Starts Here: The Audix i5 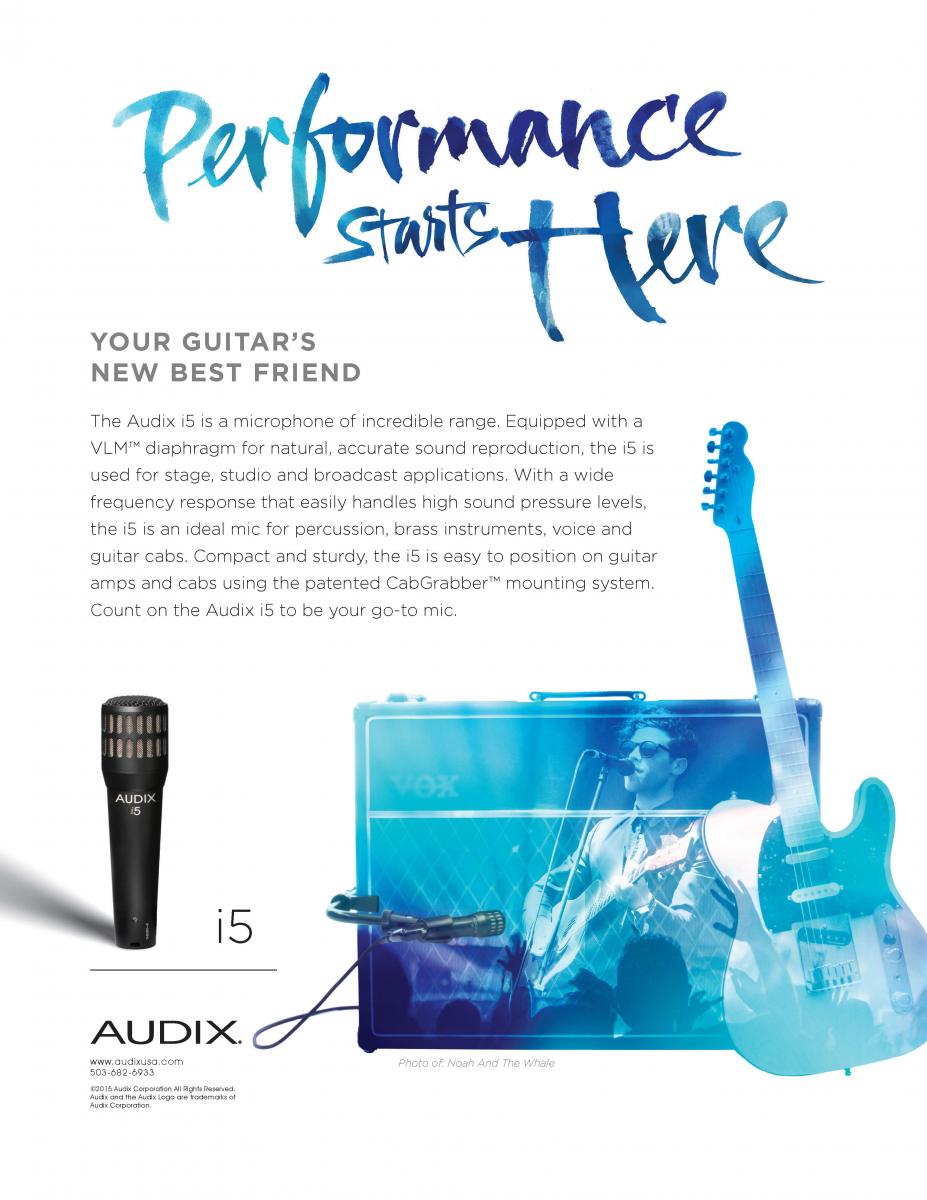 Wilsonville, Oregon, October 2014—Audix announced the release of the newest 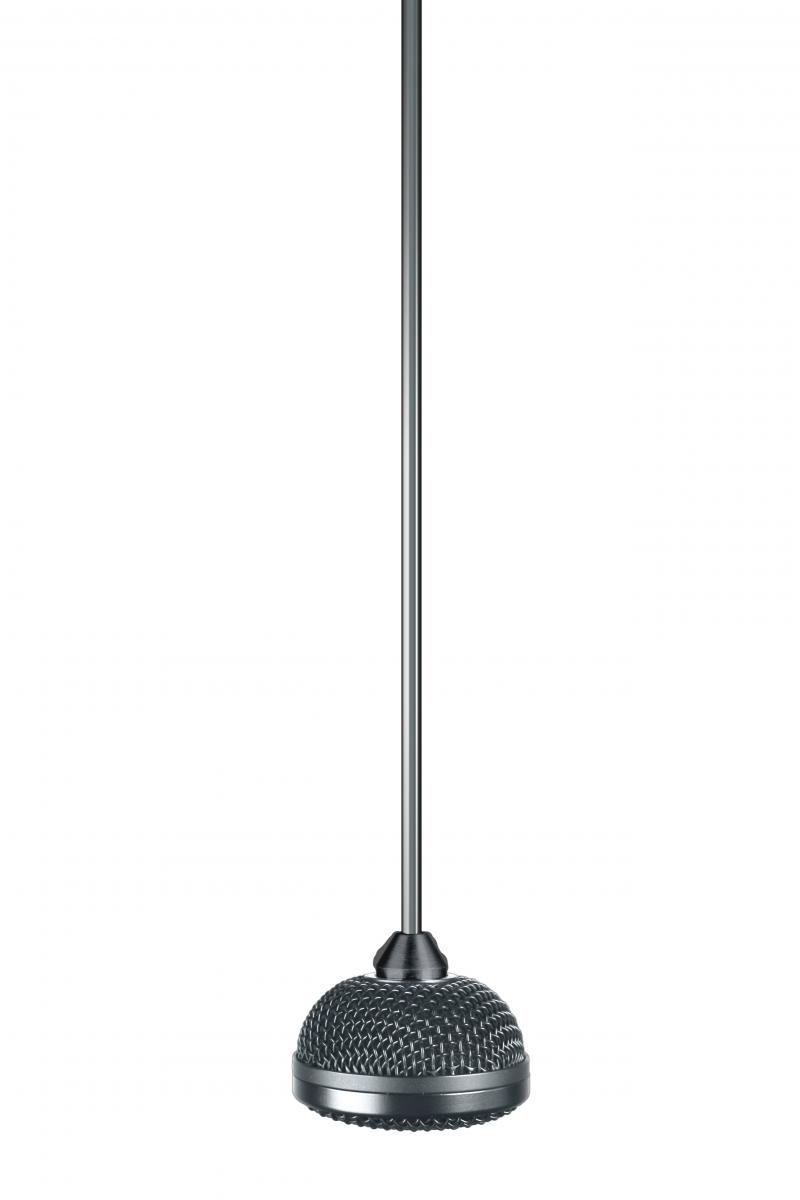 In a statement about the M3 release, Gene Houck, National Sales Manager for Installed Sound said, “We received many requests from consultants, AV Integrators, and sound contractors looking for us to build a tri-element mic with the same high performance standards as our highly successful M70, M40 and M55 conference ceiling microphones.  The M3 is an answer to that call.”

Featuring a sleek profile with contemporary design that is smaller than other multi-element mics on the market, other M3 features include:

A newly redesigned Stainless Steel Rolltop Tambour option was announced by HSA “the Rolltop People” and is immediately available at the original option’s 2014 pricing until January 1st 2015.

The company is also offering both the Institutional Lock System and the Extra Thick Sidewalls as separately available options giving designers, dealers and end-users more choices in their HSA product’s configuration.

HSA states that focusing on product engineering and refinement keeps their Rolltop Desk, Rack and Lectern line competitive, innovative and profitable for their dealers.

Make a list of problems in selecting, mounting, and positioning a hanging ceiling mic. Then solve every one of them with the Audix M55 system, th 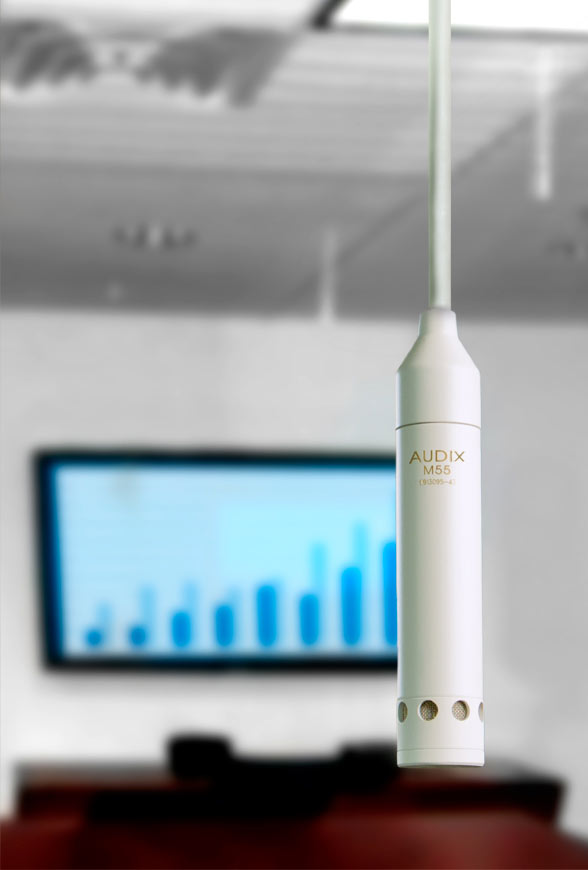 e easiest hanging ceiling mic to install and set up.

The M55 offers four interchangeable capsules – omni, cardioid, hypercardioid, and supercardioid (shotgun) – and is optimized for speech. Its electronics are fully integrated, high sensitivity, low noise, and the signal output is balanced, so cell phones and GSM devices do not cause RF interference

Installing the M55 requires drilling just one 5/8-inch hole in the ceiling, with no additional tools needed. The M55’s mounting hardware easily adjusts the hanging height up to four feet from the ceiling surface without removing ceiling tiles. An aiming clip (two options) makes additional angular adjustments easy and requires no tools. The cable assembly, with its Phoenix connector, is neatly housed in an airtight, plenum-rated
junction box. A wire safety cable provides additional seismic restraint.

An excerpt from a video produced by Midtown Video featuring the MicroBoom with M1280S  shotgun capsule.   It is not only informative but very impressive when they switch from the lavaliere mic to the M1280S.

Thanks to Lofty (our favorite Brit!) for acquiring this edited clip! 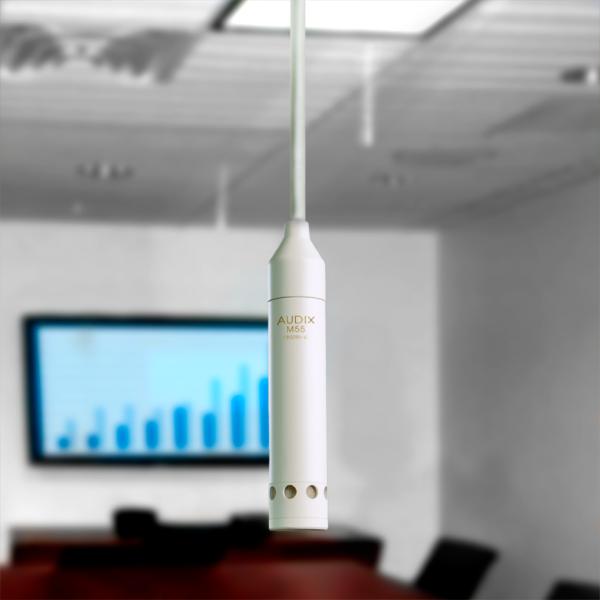 Revolutionary Ease of Installation and Use for Plenum-rated Ceilings

Wilsonville, OR - Audix is pleased to announce shipment of the M55TM hanging ceiling mic. The M55 is a miniature condenser microphone designed to solve the challenges of mounting, aiming, coverage, and audio performance. The M55 is intended for conference, meeting, board, and class room installations where aesthetics, sound quality, and flexibility are critical.

How many artists of diverse nationality, musical styles and Audix microphones can you fit onto one stage? International music group Scurdia is committed to answering this question!

In a live concert series recorded earlier this year at the Opera House in Gras, Austria, Audix mics were used extensively for vocals and for miking a myriad of instruments including percussion, tuba, accordion, strings, reeds and woodwinds.

D Series dynamic mics were used liberally for percussion and Leslie (Hammond B3). The CX112 condenser mics added top-end coverage throughout the performance. The ADX60 Boundary mic was used on cajon and percussion box, while a clip-on ADX20i covered the tuba.